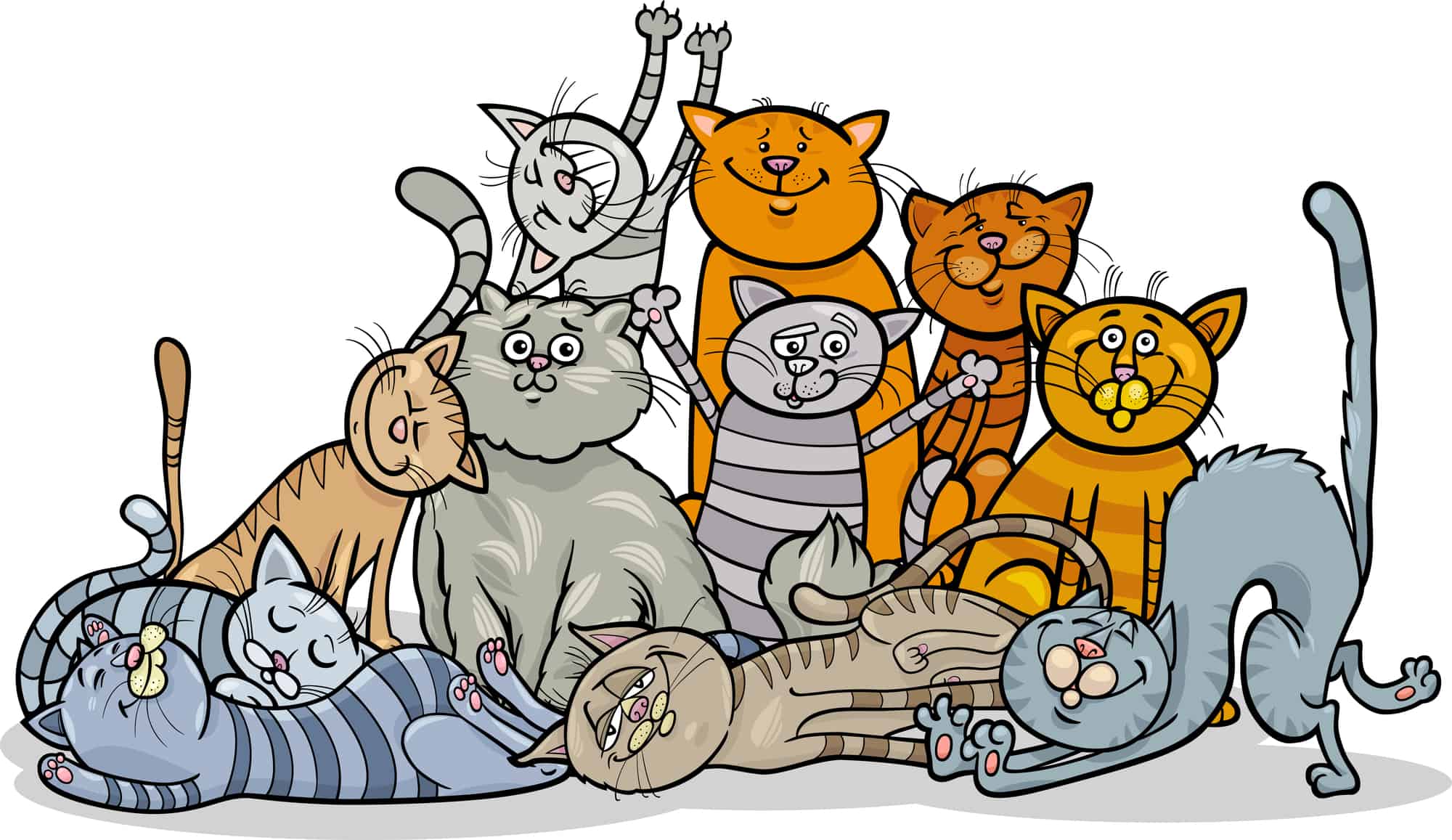 Check-In With the ‘Cool Cats and Kittens’ of Ad Purp

Last week, which feels like 8 years ago, we checked in on the dogs of Ad Purp who have been working from home for the past few weeks due to COVID-19. Of course, starting a few weeks ago, our entire staff began working away from the office, dogs included.

We’ve all been doing whatever we can to adapt, but today I’m going to report on an underrepresented group that is arguably more confused and impacted than anyone.

They’re getting a lot of quality time with their owners now that they’re stuck at home. And let’s just say, the novelty has worn off a bit. These cool cats and kittens used to think home was their domain during the middle of the day Monday-Friday. No longer!

So, let’s see what these cuties have been getting into.

Daisy Boyer was seen PLEADING for help from the outside world… trying to see if ANYONE would extend an olive branch her way. But nobody was outside! 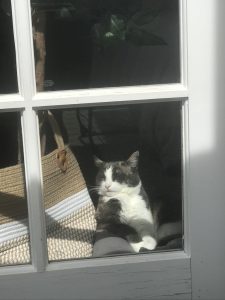 “I mean, I love Kelson, he’s great, really. But he keeps snuggling me and it’s getting old, frankly. I just want to roam around and do all my cat stuff at my own leisure. Why on God’s green Earth did this Coronavirus have to mess up a good thing we had going? Sure, Kelson works from home most of the time. But he used to get out! He did his own thing. He had a life. Now, he just obsesses over me and bothers me all day. I have stuff to do! Jeez.”

Benjamin was under the impression his owner and Ad Purp new-hire, Maxwell had accepted a new job offer and would be gone during the day. Quarantined less than two weeks after his start date, now they’re back together again 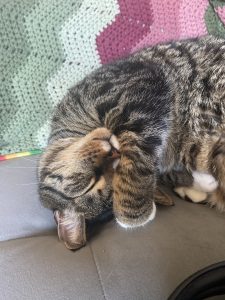 As you can tell here from his body language, Benjamin wasn’t even available for comment. “What kind of sick and twisted joke is this?” is all I could hear him muster. He had a few days during Maxwell’s on-boarding to himself. A taste of freedom. But like that, it was gone. Poor guy. It’s alright Big Ben, we’ll get through this eventually. One day… I hope?

Betty and Davy Shi basically just sit and gossip all day about Hong and how much they want her out of the house. They’re both grateful to have one another, but it’s just “a lot” according to Betty and “nice, but kind of intrusive” was the quote, I believe from Davy 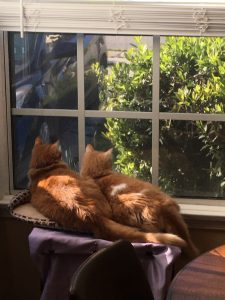 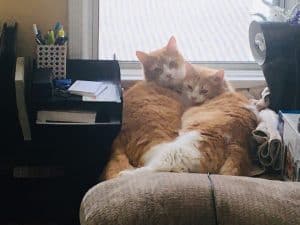 (The cat is named Davy*, not Daisy. But I still stand by the following paragraph.)

Interestingly, there is no relation between Daisy Boyer and Daisy Shi. Just a coincidence that we had two cats named Daisy, is all. But that being said, both Daisy’s looked longingly outside for any sign of hope. But with no one outside to be on the opposite end of their gaze, they must adapt to life inside. “Of course we’re kidding and love Hong immensely. But this quarantine situation is confusing as heck, you know?” said Betty. We feel you, Bets. We feel you.

Mikey, belonging to relatively new employee Javier, got all dressed up as a show of support to his dad (check out the purple). A team player, some might say… 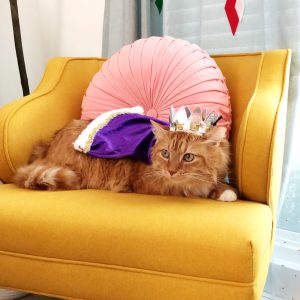 “I do what I can to be supportive, you know? It’s hard because I am so cute and I know I can be a distraction, but Javier needs me right now. With minimal human interaction, it’s up to me to show him some love. So, yeah. I wore the purple outfit. It was just a sign of my love. I’ll do it again. But again, this is MY house. Not Javier’s. So, yeah, let’s just get that straight.”

Arya (yes, named after the GoT character) is actually busy with work. Here she is on the grind at her mom Christina’s launching affiliate programs for clients 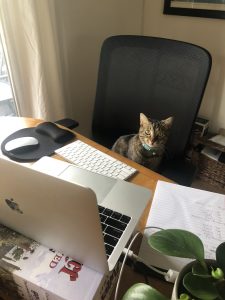 A direct quote I have from her mom Christina is, “don’t let her cuteness fool you – she’s insane”. Well if her insane work ethic is wrong, she does NOT want to be right. Thanks for getting your work done, Arya. Look forward to seeing more from you in this quarantine.

Arya’s sister Ellie also looked out the window at what could’ve been. Or what could be? Just some pensive introspection, here, really 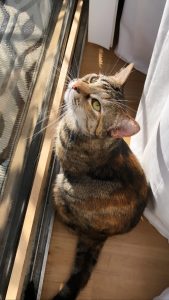 Finnick, Taylor’s son, is also working hard. Surprisingly, he can actually type even though it looks like the keyboard is pretty far away from his grasp 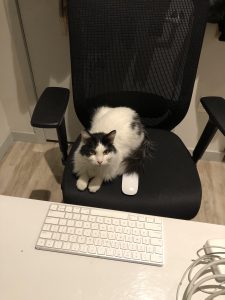 “See, what I do is I jump in the air and peck at each letter to type. It’s not the easiest process, but it works. I also have voice activated typing too and so I just tell my computer what to write. Taylor has me do a lot of her work for her. It’s kind of annoying, but I get bored easily so it’s kind of nice having a purpose.” Finnick, we love you baby but you gotta understand Taylor is getting paid and you’re not. How is this fair?

Audi, like some of the dogs, has just been asleep at the wheel for the most part, this whole entire time 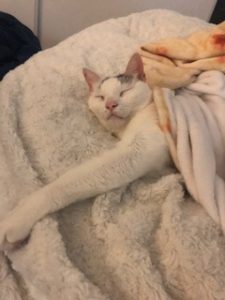 My guy Audi, belonging to Alonso, was passed out when I tried to talk to him. Unfortunate, but true. That guy loves his Z’s.

Besties Pinot Grigio (grey cat) and Miley Cyrus (white cat) have been living large with Marissa Valentino as their mom. It’s not surprising that the cat mom of the office takes (arguably) the best care of her babies.. 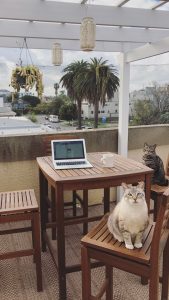 Here they are, having a bored meeting (not a spelling error, they were both kind of bored). It’s important to interface with coworkers during this time and to not get stuck in your bubble. They’re collaborating and working well together. As they should. 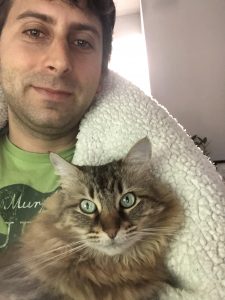 As you can see here, he wouldn’t even let her take a photo on her own. That being said, the two of them are having a good time together. They even are matching shirt color and eye color in this pic which undeniably is adorbz.

WARNING: The next animals are not cats

Guinea Pig Alert. Yes, you heard me right. These are two of Venice Gell’s guinea pigs, not cats! I know, it’s confusing. But here they are reading the dog article from last week. 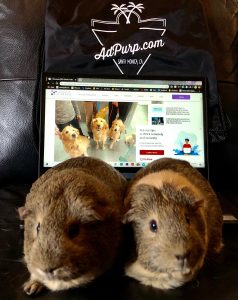 Thanks for reading, guys. I appreciate it so much. More than you’ll ever know. Why did we include you guys in an article about cats? Because look at those faces! Are you kidding me, right now?!

Again, hoping this made you smile on a beautiful Friday in quarantine. Stay safe and best of luck out there!