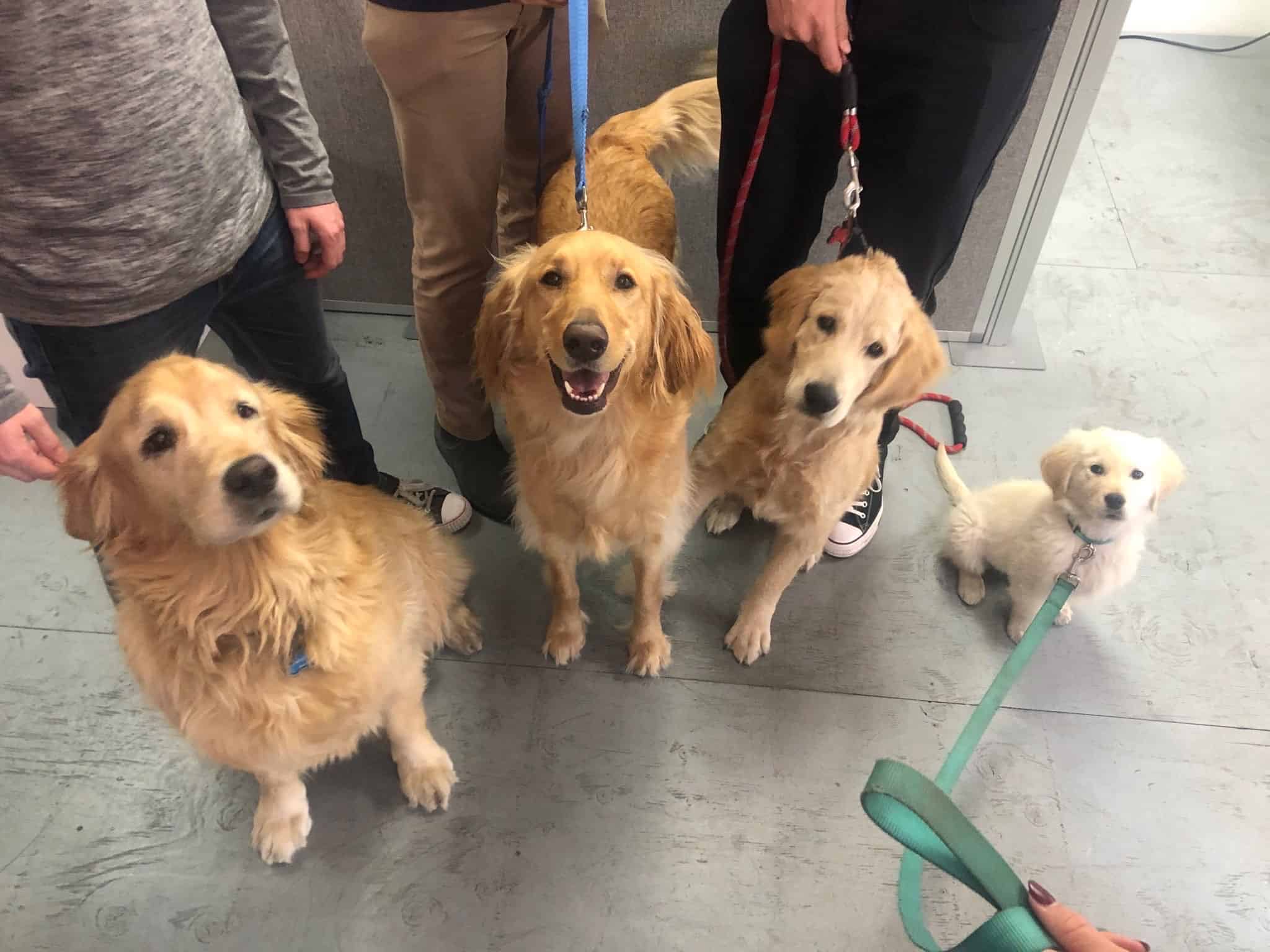 A Necessary WFH Check-In With the Doggos of Ad Purp

There’s no doubt about it. In the United States, with COVID-19 keeping most unessential workers out of the office, there has been a difficult transitional adjustment phase for those of us who now find ourselves working from home.

I’d like to highlight something important, however, that I think isn’t being addressed. This hardship undeniably extends beyond just the human race.

At Ad Purp, our offices are home to some of the goodest goodboys and goodgirls you’ll ever meet and this hasn’t been easy for them either!

Sure, dogs can’t get the Coronavirus, but their owners can. Hence, for better or for worse, they now find themselves stuck at home, too.

These doggos still need to get their work done, though. Knowing that, it was my absolute pleasure to check in on them and see what their new pawffice setups were looking like. 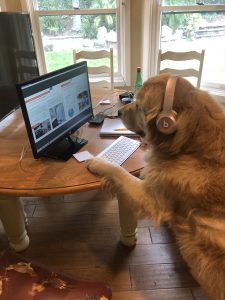 Maximus doesn’t speak English, obviously, so I wasn’t able to grab a quote. However, his tail was wagging quite a bit when I approached his new workspace (I stayed six feet away of course).

From what I could figure out from observing him, he’s been absolutely slammed with work, and his owner Jack has apparently been asleep at the wheel on multiple occasions. Hence, he’s left Maximus toiling away and grinding out most of the dirty work Jack has left for him to complete.

Jack, get it together man. Look how hard your pup is working on your behalf!

In fact, Jack also had to emergency-onboard Molly Donavan to help out with some of Jack’s other analytics duties 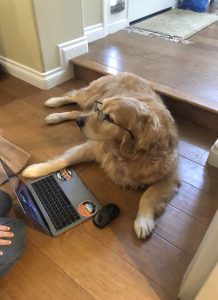 Here’s a photo of Jack clearly micro-managing Molly from just off-screen. Look at her patiently and diligently listening to whatever nonsense is coming out of his mouth.

What the heck, man?! Can’t you do your own work?

Anyway, Molly is a whiz when it comes to anything Excel related. She knows all of the shortcuts, and trust me they’re a lot more difficult when you have to use your paws. She makes it work, though. 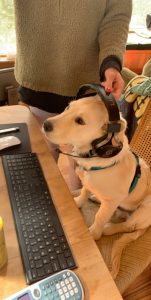 Koda was onboarded as a baby. As one of the prized recruits in the office, we knew that he was going to step into a leadership role fairly quickly. He hasn’t let us down once. We’ve come to rely on him for a lot of the really difficult work that is too complex even for some of the humans.

As you can see, he’s got a pretty good desk setup at home. He’s paid in kibbles and bits, for now. We’re lucky that he hasn’t negotiated a better salary, but I’m sure we’ll give him a raise soon. 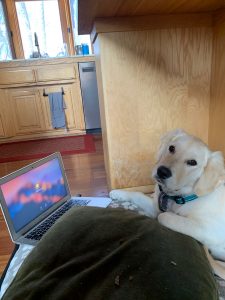 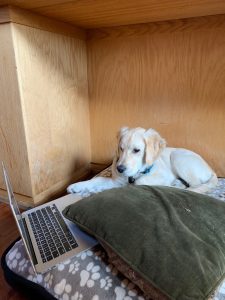 Snow is busy making sure clients’ needs are met (sort of) 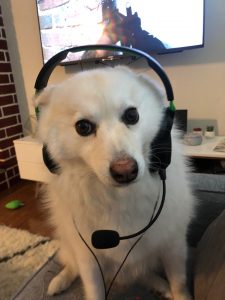 Snow is on a client call here. No, that is NOT popular video game Call of Duty Modern Warfare in the background. Um… Snow is… talking to some dogs that want to develop an affiliate program. He’s helping them… ah, yeah Snow was gaming.

But it was his lunch break!

I didn’t want to rat him out. Dang. Sorry Snowy, looks like you are in trouble, big man.

Calvin (IG: @calvin_bones) arguably with the best setup of all the dogs isn’t surprising at all 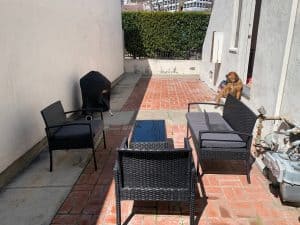 As you can see, Calvin left his computer open and turned off the screen saver and sleep mode. Therefore, people who try to contact him are left thinking he’s online… just busy. You’d never expect anything less from the #1 office dog at Ad Purp.

What’s he been up to instead of working? Well, where do you want me to begin? From sunbathing, to drinking wine, eating, and sleeping… he’s pretty much living the good life on the company dime. 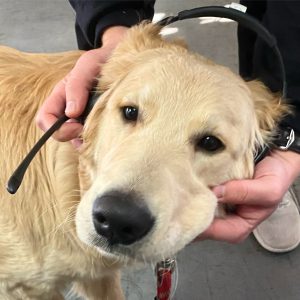 Chief, we love you baby, but ease up on ‘em. You’re closing on every call. We simply can’t keep up!

Nah, I mean, Chief normally takes his clients to Nobu and other high-class establishments that have since been closed down but he’s being innovative. Now he sends care packages to potential clients and works overtime to make sure he’s making sure all the prospects follow through.

There’s no doubt that he misses his buddies at work (human and dog alike). But he’s making due. His salesmanship is unparalleled and we’re glad to have him on board.

Theo is honestly having a pretty tough time 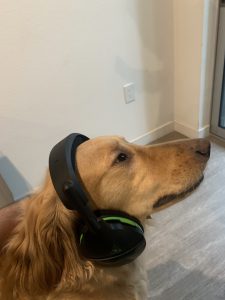 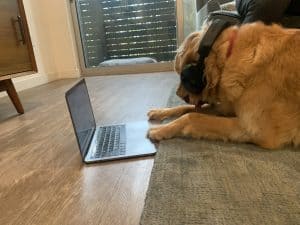 Theo’s honestly been having a little bit of trouble with working from home. He’s a very social guy and really misses his Upstairs Boys™ crew. That’s Koda, Calvin, and Chief mostly. But it extends to occasional visits from Maximus and Molly as well as the rare freelancer Bear (who is mentioned further below).

He’s often bored and sometimes falls asleep on the job. Like below: 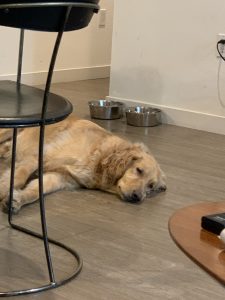 Full disclosure: This is the guy who’s writing this (me)’s dog. I love him to death and I can’t badmouth him but I will say he’s sleeping A LOT.

Bear is a freelancer, busy (quite literally) in the field working to spread the word about Ad Purp and all of our various services 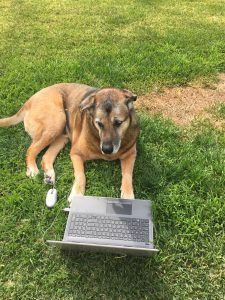 Not trying to body shame here, but Bear weighs 120 pounds. It’s hard for him to be confined to a desk. And as I mentioned before, he’s a freelancer who rarely comes into the office. He’s currently working in the field, sourcing pups and humans alike for us to engage.

He’s an elder statesman within the company and has the respect of all the other dogs as well as the humans. We never have to wonder whether Bear is getting his work done. He’s always coming up with great ideas and moving the company forward.

New hire Shiba Chen is just rolling with the punches right now, happy to have a paycheck 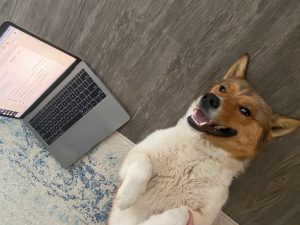 Shiba is new to Ad Purp. He’s been on a wild ride, recently finishing training. He couldn’t believe that he wouldn’t be able to meet his fellow pups and humans, but he’s doing okay. As you can see, his youthful exuberance is carrying him very far. He’ll do well here, I’m sure.

For now, he’s getting up to speed and trying his best to be adaptable. As a certified Cute Boy™, he’s going to fit in just fine. I’m absolutely certain.

He’s also a downstairs doggo, which is rare. We knew we needed him to fill the void down there, and I’m sure he will once things go back to normal.

Emmett is making the most of a tough situation 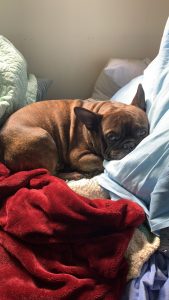 Like Theo, Emmett has been sleeping quite a bit on the job. It’s not good coming from a guy in a leadership position to be showing this side of himself when things get rough, but we’d never fire him due to his abject cuteness. The man is adorable. And he can do whatever he wants.

Emmett is a smol boy so he can fit into spaces some of the other bigger pups can’t. That’s one of many reasons why we keep him around. He’s a bright guy too. His owner is Devon, who runs the account management team. She’s pretty important so I think her vouching for Emmett helps a lot as well.

We’re going to keep an eye on him and see if he ever decides to get back on his computer. But for now, the snuggles he’s giving Devon are certainly adding a decent amount of value.

Bailey is living his best life, per usual 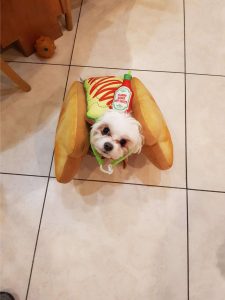 What Bailey lacks in stature, he makes up for ten-fold in bougie-ness. He is dressed up here as avocado toast. Why? Well, he’s been DoorDashing meals from all the hottest restaurants in LA over the past couple of weeks.

He hasn’t cooked a single meal.

He knows that if he wants to get back out brunching with his boys when this is over, he better be supporting those local restaurants. And he’s doing just that. And a few mid-morning mimosas have not slowed down his output, according to his dad Eidan.

His boozie solo brunches are actually helping him when it comes to supporting clients and bolstering their bottom line. Who knew additional revenue opportunities could come from huevos rancheros and a bloody mary?

Here’s a picture of Eidan for reference: 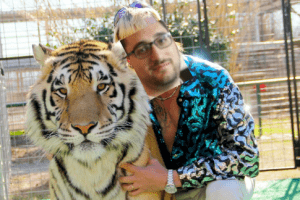 Clearly, he has a lot of experience with animals.

I hope this very silly post made you feel a little bit better in a time of crisis. We love our furry friends here and the dog-friendly office is a big part of our culture. We hope you enjoyed learning a bit more about our pups! Stay safe out there.