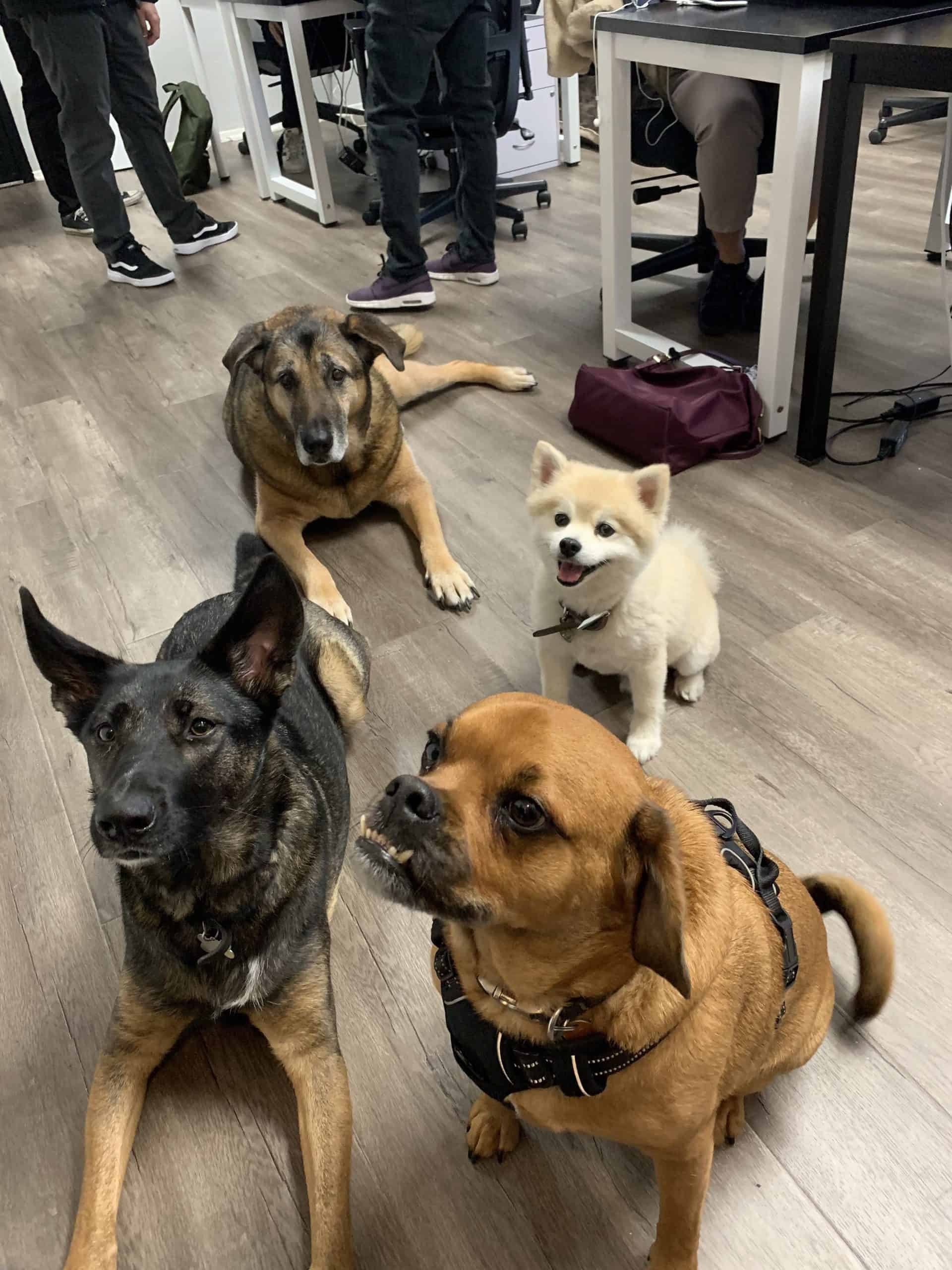 A Hierarchical Breakdown of the Dogs of Ad Purp

Advertise Purple is one of Inc’s 2019 Best Places to Work in part due to the room for growth, generous perks such as unlimited PTO, great people, and awesome offices in sunny Santa Monica, California. All great stuff. Everyone loves a 401k. But what really separates this office from the fray?

Oddly enough, and truthfully to boot, the dogs that come in to the office (and even those that work from home) are all in the 1-3% cutest dogs in the country percentile. I do not know where that stat comes from, and I will not be able to back it up with “a link” but it’s definitely true.

So, without further ado, here are the dogs (and two cats). Listed in no particular order because they are all sweet babies and ranking them is truly inhumane (incanine?).

Doggy Details: Often mistaken for being younger than he actually is (but we won’t age-shame here), Snow is a certified cute boy who only wants to make sure things are going smoothly in the office. He’s easily one of the top dogs, showing up at least once per week, and making sure everything is in order. Snow is Jon’s dog. Jon is the Chief Financial Officer, arguably a more important role than Snow’s in the office. But it’s definitely close.

Doggy Details: The man with the best underbite in the office is @calvin_bones (yes, that’s his IG handle). He loves people, trash, snoozing, short walks, food, and digging through people’s trash. Often times, he finds goodies, but sometimes he doesn’t. You miss 100% of the shots you don’t take, though, so for Calvin trash dives are almost always worth it. Calvin is Tim’s dog. Tim was the second employee, or whatever, but Calvin is most likely the reason why he was hired.

Doggy (+Kitty) Details: Gatsby loves chickey-nuggies, pillow fights, and protecting his dad Kelson’s home from dangerous burglars and criminals (that usually turn out to be UPS, FedEx, and Amazon delivery drivers, but it’s the thought that counts, right?). Daisy is the first kitty on our list, but she identifies more as a dog anyway. A 2 year old rescue Calico, she’s a big time star in her role at AdPurp. We’re happy to have both of these cuties on deck for big sales pitches.

Doggy Details: You may have noticed no last name. This wasn’t a typo. His owner does not work here. But in the words of his adoptive mother Yasmin, “Although Kevin projects “shy guy/sad boi” vibes at AdPurp, avoiding all eye contact/pats to the head, he does enjoy a rich life outside of the office. He loves small balls (usually of the tennis or ping pong assortment), the rush of falling down the stairs, play-dates with his little sister Poppy, and long walks down the LA river!”

Doggy Details: Bear is a very large man, but he’s an old wise soul and a gentle giant. He makes for a good nap partner and he loves all people and most dogs. That being said, he’s been on an extended PTO hiatus and we’re all wondering when he’ll be back. His mom, Valerie, has some ‘splaining to do, but that’s a whole separate issue. #bringbackbear

Doggy Details: There’s a bit of a conflict of interest here, and I really should mention that this is Stephen’s dog. Who’s Stephen, you ask? The writer of this blog post, that’s who. I can’t even comment on Theo because he’s a perfect young boy and I can’t even put into words how amazing he is. In fact, he is a much more important employee than me and I will openly and willingly admit that. I’ve heard many people in the office clamoring to get rid of me and keep Theo. I can’t even blame them, to be completely honest.

Doggy Details: Emmett’s mom Devon found his lucky butt on Craigslist and it turned out Devon’s internet searching was well worth it. This boy apparently is a non-barking goofball who loves male humans. And while he’s a little wary of other dogs, he does sometimes think he’s a cat. His main job function is keeping the cuteness levels of the AdPurp furry friends high. He has not failed once.

Doggy Details: You’re looking at a man with 12k Instagram followers. The fact that he’s still down to work here when he could just cash those sweet, sweet influencer checks says something. Like Snow, he’s often mistaken for a puppy and a female. His girlfriend – maybe boyfriend – is his stuffed sloth toy. His mom, Brooke, brings him in every now and then… but not nearly enough! (cough, cough)

Doggy Details: Ted is a real mensch. A dog’s dog. A dog of the people. According to his owner Ally (who never brings him in much to the dismay of her coworkers), “Ted is a classic man who enjoys the simple things in life. In his spare time, he enjoys sunbathing, staring at humans for abnormally long periods of time, taking himself on walks without permission, looking for human food on the floor, and tearing out the innards of his stuffed friends.” What a good boy.

Doggy Details: Let’s be real here, Champ is just an intern. Does he even deserve his own section on here? No. But is he cute? Yes. Okay, fine, we’ll go ahead and give him a write-up. Oh, whoops this has gone on too long. Sorry Champ, get older and then we’ll talk. (jk, he’s adorable)

Doggy Details: Maximus is a 6 year old golden retriever who loves people and his stuffed animals a whole lot. Like most dogs, he was a little bit hesitant when he first arrived at the office. He then gained a bit more confidence and started doing all sorts of impactful work. I think he has like 40 accounts. All dog treat companies, but still…

Doggy Details: Bailey, Melo, and Java are Eidan’s adorable family of pups. Essentially, when we need to get a lot of cuteness packed in in a short period of time, we reach out to these guys. They’re kind of like mercenaries of cuddliness. I love them all and I hope one day to meet one of these sweet babies.

Kitty Details: Fin “Watermelons, but make it fashion” Kim is Taylor’s cat, and he is a key advocate for our feline friends in the office. We mentioned Kelson has a cat, but Finny is actually the Cat Resources Lead for the office who fights for equal pay for cats and dogs – a very important fight and conversation that not enough people in this country are having. Keep up the good work, Fin!

Doggy Details: Jury is still out on whether or not there’s an office romance brewing between Millie and Theo, but HR will jump in if there’s even a hint of productivity lost during their wrestle-battles. Millie is Manny’s dog and a very good girl. Looking forward to seeing her more often in the office as she does WFH most days.

Kitty Details: Belonging to Marissa aka Mars Valentino, these two were named after Pinot Grigio and Miley Cyrus. Two things that pair quite well when put in tandem. And these two make quite the tandem as well, as you can probably tell. They keep the place running and we’re glad they are in the mix!

Hope you learned a thing or two about the doggies of the office (and the cats). Learn more about whatever it is the humans do at advertisepurple.com.